How to Replace an RV Power Converter

A how-to article that the all of us can use. In this RV servicing article, you will learn the basics of RV power converters, and be told the steps to replace a converter. It is not as difficult as you might have thought, especially on a fifth wheel. Perhaps you might save the money that you would have paid out for a professional repair or a replacement fitting. The article features a Progressive Dynamics Power Converter and there is a link to this and other converters at the end of the article..

Just recently I had to replace my RV power converter. I thought I’d say a little bit about it. If you think about it, I replaced the entire DC power converter system. How did I know I had to replace it? Well, my lights were flickering. If you want to know how to do that cool effect, call me. When I woke up that morning to get me some delicious drinks from the refrigerator, the light in the refrigerator was dim. Then from underneath the stairs I heard a rattling noise, a buzzing noise. I thought I had a rattlesnake underneath my stairs. When I looked underneath the stairs,I found my fuse box and my breaker box. That wasn’t what the problem was. It was my power converter.

Before we got too much further, in case you’re not a converter expert, I think I’ll tell you what I learned. Power to an RV looks like this. First off, power roars around the United States and Canada and wherever you might be, but in my case, it’s United States,and more specifically Texas. It eventually gets to a 50 amp plug, which goes into the RV. Now, keep in mind at this point, its power plant style power, and if you’re going to be an expert, that’s called AC power. That AC power goes into the fuse box for routing to different places in the RV that still take AC power. Then it also goes to a power converter. AC power goes to a power converter, you see that blue line is touching the power cord in the converter. This is a picture of the converter I’m going to put into my RV that fixes the bad converter. A converter then, needs to work with a battery. The battery in an RV will store power chemically inside the battery. It\’s available for you when the electrical system isn’t hooked to power. You can do an awful lot on a battery. I’ve written articles on that. The battery-style power, which is called DC, goes from the converter to the battery. Then on a lot of your systems on your RV–your refrigerator, your thermostats,your lighting, your igniter for your furnace, your igniter for your hot water heater–all those things use battery style power. You can do an awful lot with just a battery on an RV.

This is the part that this article is about and that is converting the blue lines, AC, power plant style power, to the red lines, which is battery-style power. For that you have to have a converter. It sounds incredible. It sounds awesome. It sounds, Oh my gosh, I need to be scared of this thing. I need to be an expert. Honestly, it sounds more spectacular than it really is. Let’s get started. First thing you’re going o do is to look in the fuse box, or your breaker box, and you’re going to look for something marked C-O-N-V. Open range marked this which is my manufacturer, not me. This is the converter breaker. Once I found the mark and know that’s the breaker, you just move the breaker to the off position in this direction. Pretty easy. What that does is that eliminates the path between the fuse box and the converter where the blue arrow points. Next thing, let’s just talk about the battery. In my RV, the battery is in this picture. This is almost embarrassing, but I\’m trying to tell a story, and I didn’t stage this like I could. So yes,the RV is full of crap. I’m embarrassed. Anyway, I digress. The battery is in the lower left. Here’s a close up of the battery. I really don’t want a battery hooked up to stuff while I’m working on it. If you connected a wrench from the positive side to the negative,one, it would get spectacular, but it can even melt things. It can melt wrenches. 12 volts, these batteries got a lot of power in them. They go a lot of hoss [SP] in them. I got a little respect for them. You should have respect for AC too, but a lot of people don’t have any respect for DC. I’m just telling you, it can do that.

What I like to do next is, I’m fortunate in my RV that Open Range actually thought ahead and put in a battery disconnect switch. I rotate it from the on position to the off position. That’s convenient for a lot of reasons, but in particular it was convenient for me to take the battery off line. Now on the right hand blue arrow, that breaks that connection. My blue converter is connected only to appliances and things that need electricity and so my converter is completely isolated, safe for me to take in and out and that’s what I did. This was a little bit of a surprise. The air conditioner runs off AC, but the voltages that power the thermostat–which is 24 in a regular house, just 12 in an RV–it killed the 12-volt power, killed the thermostat and shut off my air conditioning. Word of the wise; if you can avoid doing this on a hot day, you will enjoy life a little bit more. This won’t take long. I could replace that converter, this is RV world headquarters when I first moved into it. It’s actually a beautiful, beautiful place, and I have so many flowers. I have some pictures for that. You have to go to my newsletter, rtvn. net, and find that newsletter. It’s rtvn. net/subscribe. If you do that, you can have my newsletter and learn all about the flower and world headquarters. In this case, I’m pointing to the basement. A close up of the basement. I’ve got to get in there, and that’s where I’m going to replace the converter. Embarrassing again. Our basement’s clear full. You got to clear this stuff out. I’M not able to get anything open yet because there’s junk in there, there lies the converter. This is me. I got into the basement so I can prove to you that I did do it. Right by my right shoulder,you’ll see the shadow of the converter, but I am underneath. There is the old converter. There’s the connection to the battery. It’s actually pretty simple. Two wires connected with an Allen wrench. I did have to go get very good Allen wrenches because they were torqued on so tight that I couldn’t get them off with a regular Allen wrench. I twisted two of them. This is the close up of converter’s plugs. It’s just a positive for the positive of the battery and a negative for the negative of the battery. 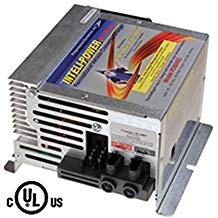 Somewhere back therein the dark recesses is a black power cord, which I thought was going to be more intricate. I don’t know what I expected. It was actually just a 110, AC plug like that. It was no big deal, but it is kind of back there and it goes to hard to reach places. In fact of the hard to reach place I had to reach up underneath through a hole, and pull out the AC cord once I found where it was plugged in. Don’t pull it out until you mentally memorize where it went in and the orientation of the plug, or you’ll regret it because mirrors and all that can only take you so far. It’s a very tight space. At least in our RV it was. Finally, there’s a ground plug, which connects to the ground of your RVs, this metal box is safe. I think that’s a good idea. You don’t have to undo that. Then there’s a screw. That’s a little black screw you can see what that’s pointing to. You’ll undo that. Something I bought off Amazon and I’ll put a link on this article which was pretty handy, was this little beast here. Let’s you snake in and have a camera that lets you see underneath corners,around things, and in places that are really hard to get to. This is going to sound dumb, but usually you snake it in to see if there’s big wasp nests or scorpion nests behind things. I just don’t want to reach in and find out there’s a whole bunch of scorpions in that area and all I had to do was snake a camera in. That is what I use it for. Pretty dang handy. I thought I would show you that.

Here is the new converter. It looks almost identical to the old converter. This is a, I think, Progressive Dynamics and a pretty slick little converter. Everybody talks about how great it is. That’s what I bought. Got it off Amazon. I’ll have a link to it for you. There’s the power for the batteries. That’s where you connect the batteries. Obviously that looks like an AC plug. It’s for the other end of the converter. It is really just these two things. AC in right here. Battery out. Put it kind of in the same spot you got the old one from. Use screws from the old converter. Fasten it down because you’ll be bumping around. Yes, there’s a reason there’s not a picture here because I forgot to take a picture of the new converter in the same spot as the old one. It’s boring. It looks the same so after you it in the same spot, you’re going to need to hook the battery together. Just remember, positive goes to positive, negative goes to negative, just like jumping your car.

You got that done. Go ahead, plug the converter AC power cord right into the spot where the old one went. That will get you hooked up to the breaker box just like it should be. You still got this situation. You’re disconnected from your system. I like to hook the battery up first because this is the exact opposite of the off. Turn the battery back on. You’re connected. Now you got this situation still where you’re broken between the fuse box and the converter. Go back to the breaker box. Push the breaker that direction, just like I’m indicating. You got a full circuit again. You’re connected all the way from the power plant to your battery style appliances and battery. Brand new, just like you had it. Everything’s going one hundred per cent. You get this little thing, this is kind of cool because you don’t need a meter; this comes with the power dynamics converter. It’s a little tiny, I guess you could think of it as a, not like a meter, but it gives you the same information a meter might give you. It tells you what mode the converter is in. This is nice to know. Of course, this was blinking like crazy, which for me meant it was in storage mode. I went in a day later and it was in normal mode which is blink and my lights were bright again. It was a happy day. Want to know more? Do you want to find some good specifications and images? Here is a link to the latest prices of power converters on Amazon