in this video when I refer to an RV it could be anything from car camping to a small tent trailer to a teardrop trailer to a van travel trailer all the way up to a giant diesel pusher. So let’s take a look. A battery is a simple energy storage device that stores electrical energy as chemical energy. In a flooded lead-acid battery there’s an anode and a cathode made of lead or alloy which are suspended in an electrolyte liquid acid electrons move back and forth between the anode and cathode through chemical reactions within these three basic building blocks.

Early in the history of battery, development battery designers were faced with a design challenge they found that lead was the best material electrically but its a soft metal that’s easily bent. The designers found that by making the plates thicker and combining the lead with other materials typically antimony for deep-cycle applications the designers were able to prevent plates from bending while being suspended in a liquid electrolyte. One of the negatives with a flooded lead-acid battery is the electrolyte is liquid and if the battery is tipped on its side, dangerous acid can be spilled. For this reason, while flooded lead-acid batteries are generally cheaper they must ship as hazardous material and will incur higher shipping costs. These batteries also give off hydrogen during charging which can cause explosions if not properly vented because hydrogen is a chemical component of electrolyte. Periodic refilling of the battery is required. As a solution to some of these limitations the sealed lead-acid AGM battery was invented. In the AGM battery the electrolyte is absorbed in a fiberglass mat between the lead plates. Spill risks are eliminated by sealing the battery The glass mat results in less gas production so venting is not required with the added bonus of not having to fill the battery with water ever. These require zero maintenance. 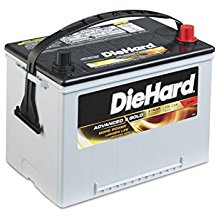 Another variant of the AGM battery is the Thin Plate Pure Lead or TPPL AGM battery type. By compressing the glass mats before assembly,as some some manufacturers do, the glass mats can lend support to the adjacent plates and eliminate the need to strengthen the lead with an alloy since it’s compressed fiberglass mats now support the pure lead. This allows more room for plates in the battery giving available power and faster charging capability to the user. By rethinking the original design challenge of soft lead suspended in liquid designers use the newer glass mat technology to solve the lead weakness problem in a different way and took advantage of increased power charge rate and longevity available by using pure lead plates.

Throughout this video blue boxes are used to represent a battery, the red boxes are used to represent a two volt cell within the battery regardless of the construction materials. The multi-plate two-volt cells are now combined in series within the case of the battery, in this case there would be a six volt battery combining three two volt cells. Again wiring any cell or battery in series causes the voltages to be additive so two plus two plus two volts equals six volts. I will be intentionally redundant when I’m talking about how series wiring affects voltage since it’s quite important in understanding these systems. The simplest RV battery configuration is a single 12-volt battery made of six 2-volt cells wired in series. They are quite useful and provide storage capacity suitable for many RV users.

Looking inside the battery you see the 12-volt battery’s construction again using 6 2-volt cells wired in series internally because of the number of golf carts in use and the deep-cycle requirements for an electric golf cart there are a lot of six volt batteries commonly available for purchase. Favored for the rugged construction and readily available supply many RV users have chosen to utilize golf cart batteries for their rigs. Frequently this involves addition of solar panels or a generator for off-grid camping electrical needs. Golf cart batteries tend to be available in the high storage capacities needed for these applications. Because RV systems are most commonly 12 volts the 6 volt golf cart batteries are typically connected in series which combines the voltages of the two batteries to equal 12 volts. This configuration, just like the single 12 volt battery has 6 2-volt cells. I am purposely pointing out the internal cell configuration because it will help to demystify a lot of information.

Battery life is directly related to the percentage of the battery capacity that we use so it’s generally considered a wise choice to use only half the available capacity to make the batteries last longer. It is important to note that the faster we return the batteries to a full state of charge, the longer the batteries will last. So don’t be lazy and put off the battery charging. The combining of the batteries here results in a 12 volt 400 amp hour battery bank. Let us take this the next step. Here we have 4 6 volt batteries combining the storage capacity of the upper 12-volt string and the lower 12 volt string results in a 12-volt 400 amp hour system so now when we compare two 12 volt batteries on the left and four six volt batteries on the right, we can see that each system is made up of two strings of six two-volt cells. The system voltage is 12 volts and the storage capacity is 400 amp hours in each system your charge controller or battery charger sees each system as a single 12 volt battery bank electrically. for electrical purposes there’s very little difference between the two systems. There are some physical differences in plate thickness, charging rate, longevity and quality and any one of the system configurations can work for your application, provided it stores the amount of energy that you need. So, if everything looks the same what’s the difference? Well if you’re choosing to buy flooded lead-acid batteries, six volt batteries are considered to be more robust, longer-lasting because they were designed to service the golf cart industry.

There’s a wealth of knowledge available and there’s a long and successful history. These require vented storage, periodic maintenance, they don’t charge as fast as AGM batteries. Your cost difference when comparing these batteries will be in shipping and storage capacity. My recommendation is to compare a cost per amp hour as a metric to choose the best deal for you, assuming you’re choosing quality batteries. Please don’t buy budget batteries. If you are choosing to pay a bit more for the AGM batteries, you’re paying for storage capacity, ease of maintenance, the ability to store batteries inside your RV without extreme venting and important, most importantly in my opinion, the faster charge rate, because the faster charge rate allows your solar system to put energy into the batteries more quickly and to utilize your generator. 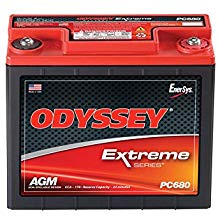 These are the right batteries for me. there are many good brands of AGM batteriesT-105 Trojans, the AGM version, Full River DC224 – 6 are six-volt batteries that are viable choices. Based on my research, I’m choosing to purchase two 12 volt Odyssey PC680 Battery

“>Odyssey PC 1800 – FT batteries. The primary driver for my choice is that Odyssey battery claims to have the fastest charging AGM batteries. A claim that’s supported by field experience of RVrs and van dwellers that I’ve personally been in contact with. One user in particular has over 4 years on a set of 2, and it’s going strong. So full disclosure, I’m not being paid to promote any of these products mentioned. I’ve not received a discount for the products mentioned and the only discount that I may get for you, is by giving you this link to the RV Batteries on Amazon

page where you will find their latest special offers. So that’s it for now, I hope you enjoyed the video and I hope you learned something about your motorhome’s battery requirements and availability..